Even More From the Cuckoo’s Nest

This came in my work email:

This morning I gave the following assignment to my writing group: “What was the favorite gift you have ever either received or given for any occasion (Christmas, Birthday, Anniversary)?  Write about it and answer these questions:

What was the occasion?

Who were the players—giver and recipient?

What emotions were felt or expressed?

“Liz, my group home manager in Grants Pass, when I spent Christmas there gave pajamas to me for a present.  I laugh because I needed P.J.’s.  They were navy blue.  I could put them on before bedtime and unwind in writing on the computer.  They were light and comfortable.  I felt like a million bucks in them because it was decades [since] I had a bed, and P.J.’s to sleep in.  You see, I had spent years on the streets and I slept anywhere out of the weather.  My clothes stayed on me, but my shoes came off when I climbed into the sleeping bag.

When my care-provider gave P.J.’s to me I acted like a child of joy.  The smell of new P.J.’s was pleasant.  Crisp, fresh P.J.’s were like I was high class.  I did thank Liz for the thoughtful gift.  She is a wonderful person and considerate.  Now, feeling human and high class I wrote better with a new mentality…..Liz [fed] us a balanced diet and shows love in working around the house.

Love for P.J.’s is the tender feeling while nights pass.  And I sleep…”

When our patient read this aloud to the class, my eyes filled with tears.  What a wonderful expression of thanks flowed from this patient’s pen!  There are a lot of things to be sad and disappointed about in our world today, but as you reflect on this story I urge you to consider “Who can I bless with “P.J.’s” during this Christmas/Hanukkah/Holiday season?”

If you have followed this blog you are acquainted with JN and his powerful images, intensely emotional poetry. Of course, he is no longer in the 50 Building- which is now abandoned across the street. He lives in this giant new beast, shiny and deceptive. They rolled up the old hospital and brought it here into a new edifice. Here’s something else-

Understood into self as the clouds drift away

Sun rises to the word of reality with shinning focus

Wind whispers it while awake in the Desert

Mountains’ tree sings it out with a hoot

The birds fly with uplifting wings

Chairs hold you in faithful promise

Rain falls to the gravities law

Monks hum to it in meditation

Spirit listens in ah while thought is created

Soul will carry it to heaven

God rewards you for understanding

Flowers wilt by it after seeding

A Babies cry with it when born

Believe while doing all things and it will be

Stories are written with the thought of it

Companions make love for a child

Can’t touch it with your hands, but imagination flourishes

Wake- that sun will make it today

Why then doesn’t it happen when we speak?

Truth and lies are from this tongue of ours

No longer in the 50 Building, since no one is there anymore. I wonder, can I change the categories? I’ve added the tag “spirit heart”. I should go back and find all Jim’s poems and re-tag. 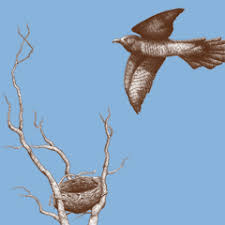 In the cuckoo’s nest, songs drift down from Bird #3.

Re-printed from Journeys Newsletter, with permission by author:

A Formula for Life

The day begins, ready or not. Shower and shave as I, Spirit-Heart, gather pen and paper.

I try to write well as the twelfth year passes.

Creatures crawl, slither and Mother Earth spins like no tomorrow. Life flourishes in the warming and drying dew.

Jesus is listening to my morning prayer. He blesses me this morning with food I enjoy.

The gravity pulls me down, toward the land of meadows. I will listen to the snow-birds sing with twilight rays.

Clouds form from taking moisture back and I start singing the lyrics to “Amazing Grace”.

My personal feeling is to trim the fruit trees in the meadow. Life needs pruning to strengthen core belief, philosophy; theory if there is a will there is a way.

These moments of shaping me, trees, life to form honest behavior. I see creatures in this ecosystem on the mountain.

The trees are pruned and I head for the creek to wash and work muscles.

Aging gives me permission to have reverence. Mother Nature folds into death with a seed to unfold life again.

My soul will go to the living universe, as I am a cup of universe soul. Life gives, takes, gives in the ecosystem and I will remember that “Law”.

I retreat to the shore after my swim from working muscles gentle, and reflect the moments I cherish while in a fold, unfold style.

The child wailed, cried, scream with flood of tears

Jimmy, abuse and resentments buried the feelings to smoldering rage

Red, fire, anger, digested as food for the soul

Fighting this rage made him engage hostility

Thrashing out, acting out is all release shown

Learning Kung-Fu meditation, give the energy to an orbiting void

Souls and Spirit, chat to entities of the orbit surface and supress

Trauma of disguise comes when future triggers are alone

A “Recovery Tree” planted as essence in the tiny orbit

Mad Poetry from the Asylum

Poems are by JN- a patient in the 50 building on Ward F. Printed with his permission but anonymous because he didn’t want to mess with all the written approval red tape- which has to be approved by the hospital and somethings just don’t find there way through the process.

JN is a big man- over 6’6″ I think. He wears suspenders and has very broad shoulders. My first impression on meeting him was “Paul Bunyan”. He never hurts anyone- no record of him assaulting staff or patients that I could find.

(JN has published a book of poetry. He has no copy but knows some libraries where it is available. He wrote it in the 1990’s.)

Still, staff are afraid of him. Especially small, female staff. He has a temper and when he’s angry he raises his voice. Usually, it’s over some small issue of arbitrary rule compliance.

Example: the soda machine in the hall outside the ward was out of product in the morning at 10 a.m. when it is on the ward schedule that they can go in the hallway with staff to get a soda from the machine. The machine was filled by noon. At 2 :00 p.m. JN asked to be able to go out to the hallway (6 feet from the ward door) with staff to buy a soda. He was told “No. The time for buying soda is 10 a.m.” JN said, “But the soda machine was empty. We didn’t get our soda at 10 a.m. Why can’t we get something now?” Staff: “That’s the rule. You know the rule. No soda. Wait until tomorrow.” JN raises his voice, red n the face, pointing his finger at the staff person,  one more minor indignity piled on top of so many others, “I am so sick of your rules! I’m sick of being treated like a child!” Staff: “That was a verbal threat. I’m putting it in your chart that you threatened me.”

Being charted as making a verbal threat means that he will have no privileges- sometimes it can mean “ward restriction”- meaning that even some of the small spaces available to sit with others or by yourself, are off limits. Sometimes it means they won’t let you go with other patients to the “yard” for fresh air. There are levels of privilege given within the confines of what is already an extremely restricted space. Level zero is the worst.

JN has not been above level zero in the year or so he has been locked up this time around. He does not expect to ever be above level zero. He has at least 8 more years in the hospital as assigned by the PSRB (the Psychiatric Security Review Board- an agency of the state courts).

Sometime I’ll post JN’s description of how he ended up in the hospital- it will blow you away. It started with a psychotic break, being told what to do by voices. No one was harmed.

BTW- not all of JN’s poetry is as heartbreaking as this- some is inspiring. You know how great it is when you are dreaming and find out you can fly? Sometimes reading his poems I feel like crying and flying at the same time.

I will be posting more of JN’s work over time. Maybe we’ll get permission to show his name- he’d like that. The guy that does the hospital newsletter (which never has patient-produced content since I’ve worked there) says he will print one of JN’s poems in next month’s edition. I’ll be waiting.

We watched a butterfly be born into the world

Held hands at a scary film

Smiled with our eyes

I love you was spoken a lot

Mingled with other couples

Broke up once or twice

People talked about our relationship

She wrote when I was gone in jail

This is where we failed

My time was longer than her love

Have a picture of her I can’t tear up

Wish I wouldn’t have made my mistake

Stakes were too high for me

The sentences flowed with suicide contempt

Depression is in the suggestion note

He was a perfectionist in writing what was said

It started with “To Whom it may concern”

It was the sadness in-between that will catch your heart

It wasn’t his dear concern that frightened me

It was the truth of his light that shined through

He was the only one feeling

More of his emotional turmoil churning the past

At last he was drained and insane

Mentally whipped- to no return to serenity

This is was his suggestion

Void was full of that dark stuff

Nothing to carry him to the next moment

At this second he was dead

All blessings to you, JN, with your deep compassion for the pain of others, your courage in the face of utter dark, with your warrior spirit-heart that lets loose the birds of language you call poems.

I love that you have new poetry for me every time I see you in your prison even though you hadn’t written in years before we met.

My thanks, my prayers for your trust and faith.